On the "Forgotten Coast" of Apalachiacola with Hannah enjoying some oysters and girl time...don't bother looking you won't find us!
Posted by Unknown at 6:40 AM No comments:

To your enemy, forgiveness.

To an opponent, tolerance.

To a friend, your heart.

To a customer, service.

To every child, a good example.

~Oren Arnold
Posted by Unknown at 8:13 PM No comments:

Stage Hands Massage Team is "USHER-ing" in the New Year!
Posted by Unknown at 6:30 AM No comments:

Chilly here in the Ocean Stage....brrrr
Posted by Unknown at 5:31 AM No comments:

Waves of Healing hosting Ladies Night once Thursday a month at Chiazza Trattoria in Barrington, RI, from 6-9 pm.

We'd like to help you bring in the New Year by giving you the gift of wellness.

Please join us on January 13 for a Health & Wellness night! Spa prizes and giveaways!
Posted by Unknown at 7:08 AM No comments:

A day in�Boston walking the Freedom Trail.
Posted by Unknown at 5:40 PM No comments:

It was a rainy day in Las Vegas on October 20th for the sixth annual Roadie Palooza at the Double Down Saloon. It's an annual gathering of Roadies held by ROADIE.NET to celebrate the ROADIE life. Despite the weather and the middle of the week date many roadies came out to see old friends and the award presentations. 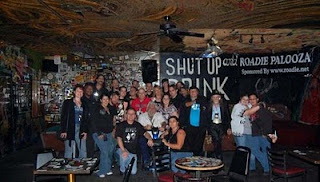 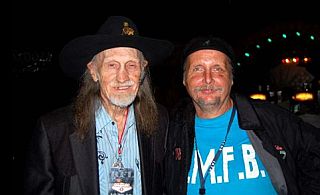 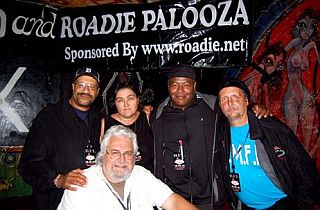 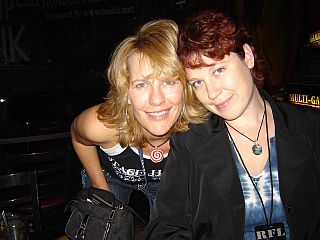 The awards ceremony followed. The first award was to Jef Hickey RFL, who was unable to attend. Jef received a "Lifetime Achievement Award" for his contributions to The Show." Jef started in the business at age 15 with bands like Motorhead, Twisted Sister, Megadeth and many others.

The second award was to John "Boom Boom" Watkins, a legendary Pyro Roadie. John pretty much invented the use of pyrotechnics at rock shows back in the 70's and has worked with artists which include Kiss, Bon Jovi, Journey, Van Halen (Hagar version), Michael Jackson, Rick James, and Ronnie Jamies Dio. John was honored for his contributions to The Show and specifically to being the father of Pyro. 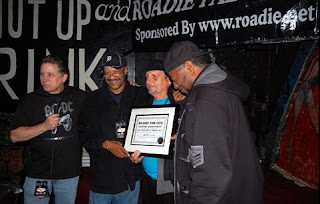 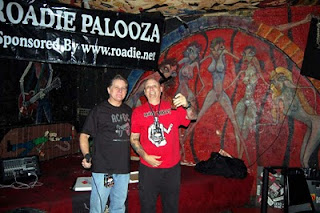 Karl Kuenning & Pyro Pete Cappadocia
The night ended with a special announcement from Larry Smith (TourLink, MobileProductionpro.com). Larry announced that Roadie Palooza will be held in January in conjunction with the 2011 TourLink Conference. The date will be Thursday January 27th 2011 in Scottsdale AZ. Special Roadie.net member prices will apply for both the event and the hotel.

Stage Hands Masssage Therapy debuted at the ShowBiz Expo in New York on Oct 9. This 5-Star event is the largest tradeshow & conference for the Entertainment Industry and brings together everyone who works in Film, Video, TV, Theatre, Fashion and Live Events. 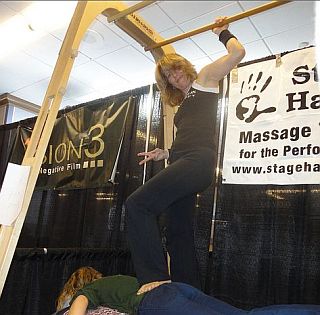 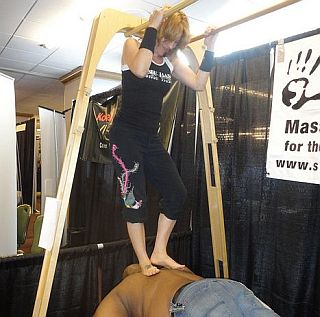 Darcy Lynch, Stage Hands Massage Therapy, Inc.
Attendees come from all over the world to meet with leading companies who provide products & services to the ShowBiz Industry, network with their peers and attend workshops, seminars and film screenings. 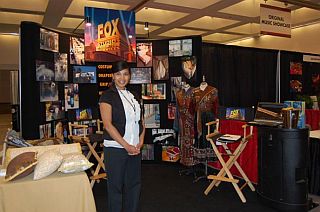 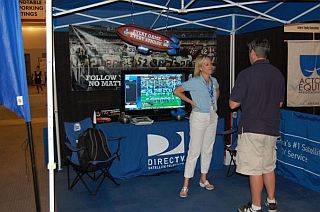 DirectTV
This is the most anticipated networking event of the year for the ShowBiz Industry! Stage Hands Massage was honored to be a part of this event as our massage and bodyworking services are now being requested on some of the largest motion picture sets in the entertainment industry. 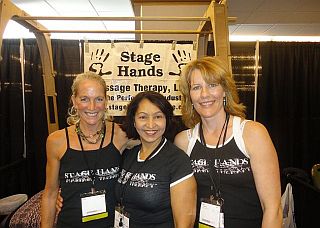 Cindy, Maria & Darcy, Stage Hands Massage Therapy, Inc
Keep Stage Hands Massage in mind for your tour or production! We have massage therapists, chiropractors, acupuncturists, yoga instructors and personal trainers all over the world!
Posted by Unknown at 6:06 PM No comments: